The cardinal mosque is the second-layer representation of the location in Submachine 8: The Plan.

This location consists of a kind of mosque or church with Arabic design. It is unknown if the zone was used for religious purposes. In the upper part, there is a white stone structure resembling an igloo or a dome. The background contains a landscape showing a big white star in the left illuminating a cloudy atmosphere, which disperses the star's light creating an orange colored sky. In the right, the orange color disappears revealing some less bright stars shining over a black void.

There is also a beamer that opens access to the cog trees.

The interior areas have light gray floor and walls, decorated with a repeating pattern of squared symbols and repeating blotched designs. The series of four rooms all have dark colored arches whose columns separate the scenes. In the far left and far right rooms, stairwells each lead up to hemispherical domed rooms. In the center of each are pedestals representing a compass rose.

In the area to the right of the left stairwell is a tall, ornate cabinet with 14 storage areas, the doors of which slide out to the sides horizontally. Below the floor in this area, there is a small room accessible only through other layers. Here, the dark colored walls are very old, chipped and broken. The rear wall has the same light gray coloring and intricate square patterns on it as seen in the main area one floor up. On this rear wall, a large piece of the thick, decorative wall panel has been broken off and placed on the floor, revealing the same dark eroded surface as seen on the left and right hand walls. In the center of the room’s floor is a dark gray box, strongly resembling an Egyptian or Greek sarcophagus. The side of the box appears to have been smashed in, leaving broken pieces scattered about. The thick, square lid has been removed and leaned against a wall. Above this on the ceiling is a noticeably lighter-gray colored square panel. This large, solid gray panel is also quite noticeable in the floor of the room above it, creating the possibility that there may have once been a ladder or some form of link between the two rooms.

In the room to the right of the cabinet, there is a ring post that has a link with another ring post, located in the same position of the third layer: when this ring is rotated, the other ring moves accordingly.

In the far right hand room there is a panel on two support posts. This panel has a large display screen with seven switches above it. Each of the switches can be rotated from the 3 o'clock position to the 6 o'clock position, turning them from red to green. Each one of the switches turns on a thin green vector-like outline drawing of each of the 7 layers in Sector 9 that have been explored by the player at that point in time. Once the first 6 layer's beamers have been activated, the message "the plan___sector 9" appears on the screen when all 7 switches are turned to green. Although a vast amount of combinations can be met from turning these 7 switches to red or green, the ultimate purpose of this display panel is unknown. 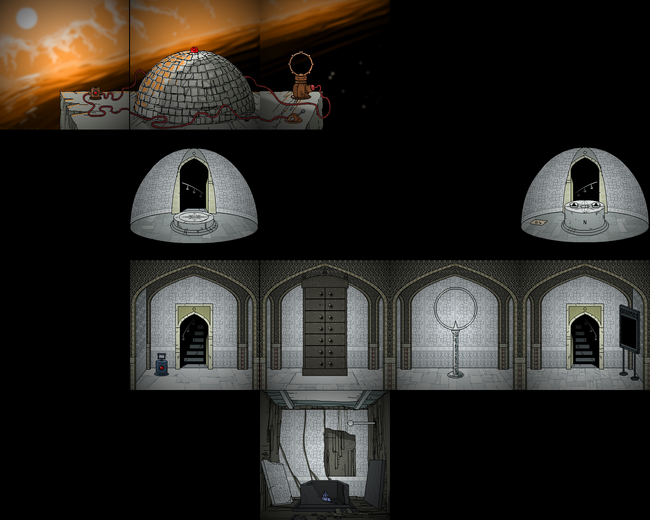