Cipher plates are objects found in Submachine 5: The Root used to teleport the player to different locations.

Cipher plates are used to enter coordinates into the Root's transporter. Each plate represents a single coordinate and can be placed into one of the transporter's slots.

The cipher plates were most likely made by the Root staff, as they are used in their transportation system.

The player later finds two of them, and by inserting one or both of them into a metal box and pressing the button, they are transported to the corresponding location. For example, if the player inserts cipher plate 1 and then cipher plate 2 into the box, they will be taken to the coordinates (1,2).

A coordinate of 0 means that no cipher plate is found. (0,0) is a valid coordinate group but (1,1) and (2,2) are not. The total number of locations that the metal box can take the player to is 7.

Cipher plates 1 and 2 are found in Submachine 5, along with storage space for an additional four plates. This hints that there may have once been six unique plates, allowing a combination of 43 unique coordinates.

During Submachine 6: The Edge, the player leaves both of the cipher plates in a disposal bin in the lobby. It is possible, however, to leave both of them behind prior to the end of Submachine 5.

At location 553 in the Submachine Universe, there are empty storage slots for 12 more cipher plates. Whether these once held unique plates or extra copies of the original six is unknown.

The two plates can be distinguished at a glance by how many prongs they have at the bottom; cipher plate 1 has a single prong and cipher plate 2 has two. 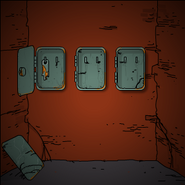 Cipher plate 1 location in the Root base. 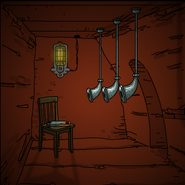