The cog trees is the third-layer representation of the location in Submachine 8: The Plan.

This location is set in some sort of ruins, made of a red material, in which some leafless trees have grown. There are many yellow bamboo shoots with sporadic green leaves in the background. A complex metal mechanism has been constructed over the supporting trees, consisting of a system of gears, wires, a circular lever, and a large metal dome which the player lifts to reveal something. There are also platforms secured to the trees with decorative supports resembling cog wheels below them. Individual metal ladder steps with curved support beams are secured down the side of the yellow-orange barked tree in the leftmost area.

The central, lower area is a view of the bottom-most trunk section of the larger tree that appears to have also completely grown out of and into the red colored, main structure in ruins below. The entire structure is covered in red clay or terra cotta type flat bricks which have each been marked with random symbols or drawings, with slightly more detailed symmetrical patterns found on the larger square bricks.

In the rightmost area there is a vertical tower made out of the same red material as the lower ruins. On the right side of the tower, there are holes for the four large red balls that must be collected. Eight ladder steps also slide out of the tower horizontally when activated. This location's beamer is found atop this tower.

Reachable only from another layer, the larger tree has a hidden room beneath it. Inside the room is a domed red pedestal. 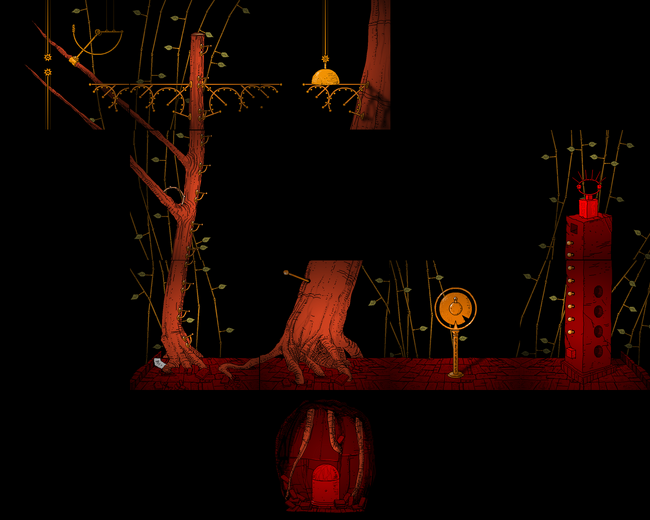