The defense system corridors are a series of hallways that house various functions of the subnet defense system. It is believed that most, if not all, of these corridors can be found in the Edge.

The corridors were sought after by the exploration teams, who were told by Murtaugh to invade and shut down the defense systems. The player was also sent to the corridors in Submachine 6. Eventually, the player returned to a corridor in Submachine 10 in order to shut down S.H.I.V.A.

The typical defense corridor room is a bluish-teal color with semi-reflective, cleanly polished walls. Some corridors also feature ports for a connection pod and some house gates to different areas. Still, others show ventilation fans or electrical wiring.

The defense corridors have appeared in three games: Submachine 6: The Edge, Submachine 10: The Exit, and in Submachine Universe.

In Area 4 there is a single connection pod terminal, a security display, and a gate to Area 8.

The terminal includes the subnet infestation map (hidden by protocol 54-4) and the Area 5 security door controls.

This area is made of one room. There is a single connection pod terminal and a matrix of nine 3x3 grids of constantly flickering lights.

Within the terminal, a graph of the light matrix can be found, along with a message that says "personal IDN not present". Because of this, it is presumed that this chamber operates the personal IDN system. The terminal also accommodates the Area 8 security door controls.

Area 5 is on the first level of the structure.

panels. It is possible that the ventilation system cools these servers. The first terminal controls protocol series 54 (protected by gate 3/18), the ventilation system, and includes a message in-box. The second terminal contains the control for gate 3/18 and displays the elevator graph. This graph can be used to control an elevator whose way-points include the mainframe, the control panel for turret chain 512, and Area 8 itself.

Area 8 is on the second level of the structure. 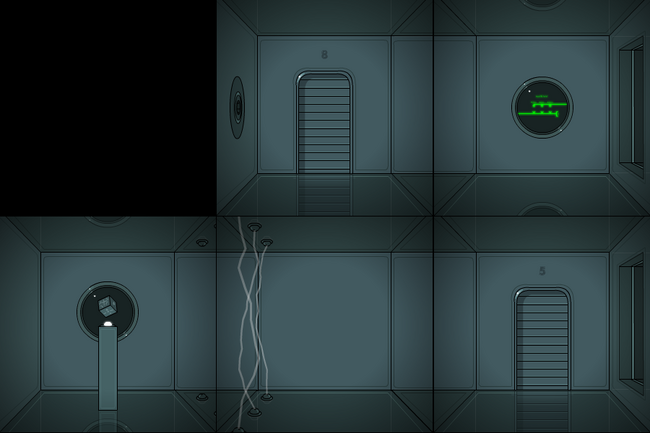 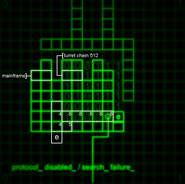 An overhead view of Area 8 provided by the system, showing the connection points between Area 8 and the Mainframe. 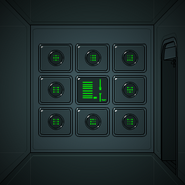 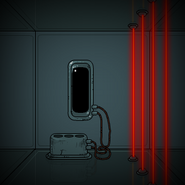