In Submachine 10, the desert surrounds the buried lighthouse. A tall flag post with five orange flags is erected right outside. A tall stone shrine is buried in the distance. The shrine has an entrance toward the top, below a pointed spire. Another flag post is buried here, with five dark green flags. A light green banner bearing the unidentified Submachine logo is also located here. Einstein sits on the shrine looking to the left. Three camels with harnesses stand to the left of the shrine. Elizabeth and Murtaugh sit on top two of them.

In Submachine Universe, the main character enters the desert by using a green karma portal to exit the observatory, the dome of which is located above the sand. More orange flags stand outside the dome. Three radio dishes are situated behind the observatory, with only two intact.

The desert's atmosphere is a warm blue-green color that carries waves of sand particles. Two crescent moons are visible in the sky. It is not known whether this suggests the Submachine series takes place on an alien planet or on an alternate-layer version of Earth. However, a forum post by Mateusz Skutnik suggests the latter.

This area exhibits the result of the burying of the lighthouse, which is described here in a forum post by Mateusz Skutnik. 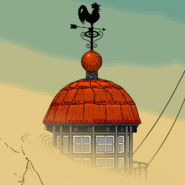 Detail of the lighthouse. 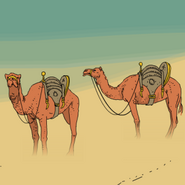 Detail of the camels. 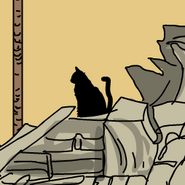 Detail of Einstein atop the Shrine.

Detail of the Submachine logo on the green banner.