The dharma alcove is an alternate layer of the study in Submachine Universe.

This layer of the study has only two rooms. The overall color scheme of this area is a dull orange color. The walls are made of bricks of this color.

In the left room there is a replica of the machine seen in the study. It is sitting on a brick stand that was covered in concrete. Some of the concrete has chipped away.

There are also two lamps, in lantern-like stands in here, and a huge wooden Wheel of Dharma can be partially seen. A plaque on the wheel contains the numbers "245", cluing to the cake loop.

To the right of the layer-switch device is another similar brick stand, with a flat brass bowl like the one seen in the pyramid. Pouring karmic water into the bowl reveals a karma portal to far, with solid drippings of karma descending into the bowl. A column of unidentified symbols stands behind, and to the right a cliff ends in a sheer drop-off to the void. 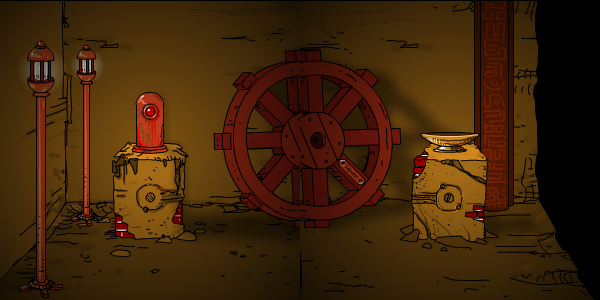