Submachine Wiki
Register
Don't have an account?
Sign In
Advertisement
in: Pages with reference errors, People, Submachine 2,
and 6 more
English

Elizabeth, commonly known as Liz, is a central character in the Submachine series.

Not much is known about Elizabeth, especially her early history, as most references to her in the early Submachine games are through references to Murtaugh.

Elizabeth is generally viewed as a woman who was particularly skilled in space/time travel, though which methods she uses to achieve this are unknown.

After Murtaugh deserted the people of the Core and started an isolation in the Kent lighthouse, he wrote to Elizabeth about his desires to create a karma portal out of the Core to the Outer Rim.[1] She warned him that it would rip apart the fabric of the dimension and if he uses it he won't be able to return to the Core again. However, she did make a promise to take care of Einstein for Murtaugh, while he was away from the lighthouse.[2]She then returned the cat to Layer 1, from where it originated.

In the end, when the people decided to bury the lighthouse with Murtaugh still in it, she could understand why they did it. Murtaugh had caused too many deaths by that point.[3]

Return to the Core[]

At some point, Elizabeth had docked her ship in the ruins of Winter Palace, although she said she found it a bit ironic.[4] She pondered how the area was built and why it had collapsed in the exact way it had.[5][6]

Elizabeth guessed that Murtaugh was getting near with intent to invade the Core, so she put up a notice in the Sanctuary to warn the player, and congratulated them on finding the location, which acts as a passage to the Core. She also left notes where she apologized for not finding the player earlier.

When Murtaugh invaded the Winter Palace, Elizabeth escaped via an escape pod from her ship. There she wrote a note, in which she apologized that she had to leave the Player in this dimension, but she had to warn the others. Elizabeth then traveled to layer 5 to warn the people Murtaugh was after.[7]

It seems she had succeeded, and the others managed to flee into the Knot.

After Murtaugh was confronted in the knot, he understood his mistake and fell to his knees, as Elizabeth comforted him. By doing this she warded off the attack planned for Murtaugh to be shot at gunpoint.[7] Elizabeth explained Murtaugh's behavior to others and somehow a religion grew around them.

After this Elizabeth became known as the Healer, the Mother and the Merciful, as depicted on her tomb.

Elizabeth maintained contact with Murtaugh after he returned to the karma studies facility to find ways to undo the damage done by karma portals. She acted as a "ground" for reality for him, reminding him of the nature of the Submachine and how it too was trying to heal itself.[8] Liz frequently reminded Murtaugh that he was only a part of the entire creation and therefore could not fix everything himself.[9] She also made plans to meet with Murtaugh at the shrine regularly.

At one of these meetings, she and Murtaugh met the player.

Murtaugh eventually succeeded in making a karma stabiliser to restore karma portals to their original state. After dying shortly afterwards, Elizabeth spread his knowledge of karma to anyone she could reach.[10]. Elizabeth eventually died as well and was buried in the temple, alongside Murtaugh, where she is believed to reside in the light of Shiva.

“Will you take care of Einstein for me?”
— Murtaugh

“Find Liz. She will guide you. If he's the explorer, she's the solver.”
— A predecessor of the player.

“The King always wanted this palace to become a safe haven for people of science.”
“Here I am, my king.”
— Elizabeth

“Why does this sociopath only talk to Elizabeth?”
— An explorer, referencing Murtaugh

“If he's the explorer, she's the healer. If he's the child, she's the older sister. When he couldn't understand, she knew that it wasn't his fault. When he fell, she picked him up. When they wanted to kill him, she explained.”
— Unknown

Elizabeth is mentioned in several notes throughout the Submachine series. The notes where she is only mentioned are marked with an asterisk (*). 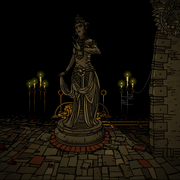 A statue of Elizabeth found in the temple. 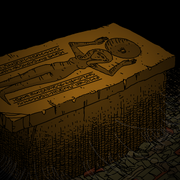 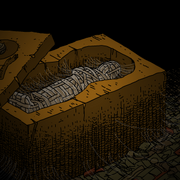 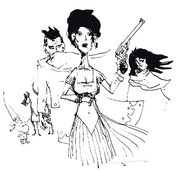 Livestream Sketch of Characters Include Murtaugh, Elizabeth herself, Einstein, Kara (Covert Front) and Santa from the Where is New Year? Game Series.