The false loop is a location in Submachine Universe.

This location consists of thirteen nearly identical rooms forming one long corridor. Each room has red brick walls covered with yellow plaster. They are lit by yellow lamps mounted to the walls. There is no visible ceiling and the floor is covered with wood planks. The rear wall consists of a low parapet, but is otherwise open to the void. The rooms are connected by brick arches; two of the arch spaces are bricked up.

The karma portal stand in this location's drop zone is made of stone and consists of a small cylindrical base with a large cone supported by four spindly and uneven columns. A small wrinkle in the front houses the karma portal.

The room on the left contains a telescope. Looking through the telescope reveals another wall with the message "DO NOT LOSE FAITH" etched into one of the bricks. The room left of that has a code screen on its wall and its left archway is bricked up.

The hallway to the right of the portal contains nine identical rooms. The tenth room has the TILE D and a bricked up archway. 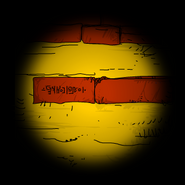 The view from the telescope. The writing reads: "Do not lose faith".