Karma is the mysterious substance explored in the latter half of the Submachine series.

Karma is a substance that can be mixed with regular building materials to make "antistructures", or floating structures that encompass all seven layers of reality. It's a tool to help achieve the Plan.

Karma is mostly seen as a blue substance that can be seen beamed through the void, holding up supports of the Winter Palace, or activating wireless connections in the karma studies facility.

The most famous use of karma is when it is concentrated in the karma arm, a tool used by Murtaugh to experiment with drawing karma portals. Karma portals are concentrated areas of energy that can teleport humans across the subnet. If they are made properly, they will not cause lasting damage to the surrounding areas. Example of successful karma portals can be found in knot locations such as the pyramid and the temple.

Karma portals that are unrefined and unstable, however, can cause extreme distortion of spacetime in a layer or two and can destroy buildings. A extreme example of this is shown in the South Garden.

Karma, when superconcentrated to be used over multiple layers, glows a bright green. It can be found in liquid form in places like the knot, where it can be used to build certain structures and craft items. Another main use of green karma is to give access to different layers by connecting series of beamers together. This works in tandem with a navigator to allow interlayer travel.

Murtaugh first discovered the power of karma at a waterfall in Kent. He spent much of his life wielding karmic abilities and refining them. In the process he became very secluded and destroyed a good part of the subnet while also helping cause the Collapse and fragmenting the Plan.

However at some point Murtaugh studied karma excessively in a laboratory to try to reverse the effects of unstable karma portals. Eventually he succeeded in reversing the damage of some localized portal areas. 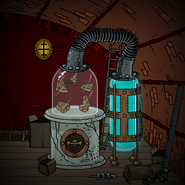 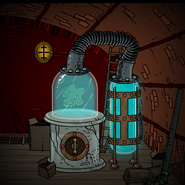 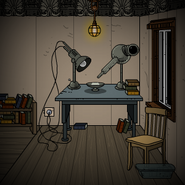 A micro-study setup for karma. 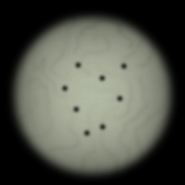 The same as the first picture, except on an individual particle scale. 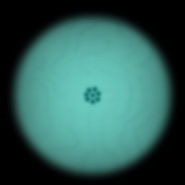 The same as the second picture, except on an individual particle scale.