The karma studies facility is a location in Submachine 10: The Exit.

This site has been used by Murtaugh as a laboratory for research on karma portals, karmic energy and its effect on the subnet.

Despite his earlier research (the Lab) where he attempted to map the many divisions of the subnet, he focused on its basic structure to find a way to reverse the effect caused by his karma portals. He used the microscope experiments as well as the telescope in the left section in his work.

After understanding the basic principles (e.g. how the architects of the Plan managed to build stable walls with karmic water) he moved on to practical experiments which he then scaled up to macroscopic objects (middle and right section) and finally minituarized his invention, which became the karma stabiliser.

The outside doors lead into three different sections. After powering a karmic light bridge on the far left a karma portal leads to the tile room D.

The entrance room is equipped with a telescope and a microscope. Murtaugh used it to analyze the properties of the subnet and loops.

The basement below looks much like a workshop filled with books but no tools. There are however three sub-bot capsules in this area, as well as a deactivated sub-bot.

The entrance leads into a hallway, where another door leads into the research rooms. For unknown reasons, it is initially barricaded with chairs and other materials. The main section is divided by another hallway.

In the front part, an experiment is set up. By switching the lamp on microscopic particles reassemble into a geometric form and stay that way as long as the light stays turned on. This is meant to demonstrate the restoring effect of focused karma that Murtaugh was studying.

The back part features another magnifying lens and one of the four fuse machines. On and around the desk lie four human skulls.

The entrance outside is situated downstairs. The upper cliff can be repaired with the karma stabiliser. The section itself consists of several (cross) vaults separated through another three doors.

The left door leads to a room where one of the two radio boxes and the bull head bust (receiver) are stored. The middle room contains a karma portal stand that leads to the cliffs, but it must first be repaired with five vector finders. In the right room, another experiment is set up where this time a piece of stone wall can be reassembled or reset by opening the valve to the karmic energy vial. 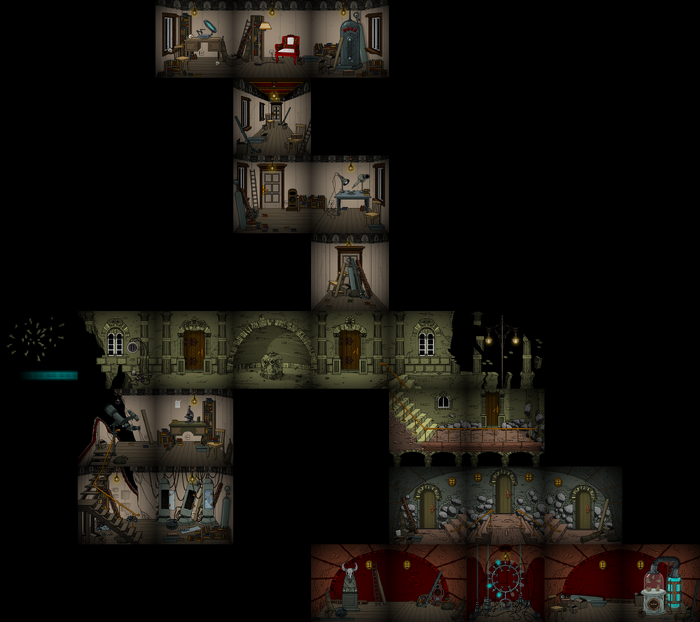