The Nazca room is a location in Submachine Universe.

The walls are made of stone and the floor of wooden boards. Drawn on the walls in fluorescent blue ink are reproductions of the geoglyphs in the Nazca desert.

There are seven sections in this room. The section with the portal has a drawing of "The Hummingbird" on the wall. To the section on the right, there are drawings of "The Monkey" and "The Hands". Also present here is the "In Your Mind" theory by Isobel the Sorceress. To the section left of the portal is a drawing of "The Lizard". The leftmost section has drawings of "The Spider" and "The Condor" and a hole in the floor. Going down that hole leads to a section with a drawing of what appears to be "The Pelican" and the number 947, which clues to the room 947.

There is also a replica of a drawing of "The Lizard". Directly above is a karma portal that seems to have shattered the walls of the room and leads to the lattice room. To the left is a section that opens to the outside while being blocked off by railings. There is also a drawing of an unrecognized symbol here.

On the "Lizard" section, there is also a device with a circular screen, which shows a 10-second video of a sewing machine. The point of this device is currently unknown.

The pictures on the walls of this area are clearly reproductions of the Nazca lines which are geoglyphs located in the Sechura Desert in Peru.

The lines were created between 400 and 650 AD, by the Nazca culture. According to the local legends, they were used as sacrificial sites by the Indians in order to ensure the rain and with that avoid drought.

The theory in the area talks about ancient tribes, who discovered a wisdom gem. They were - in the theory - wiped out by another rivaling tribe who sought their land. Their minds in turn were devoured by the wisdom gem. This fits to the history of the Nazca, as the culture was never very tight, and wars were constantly fought between their cities. 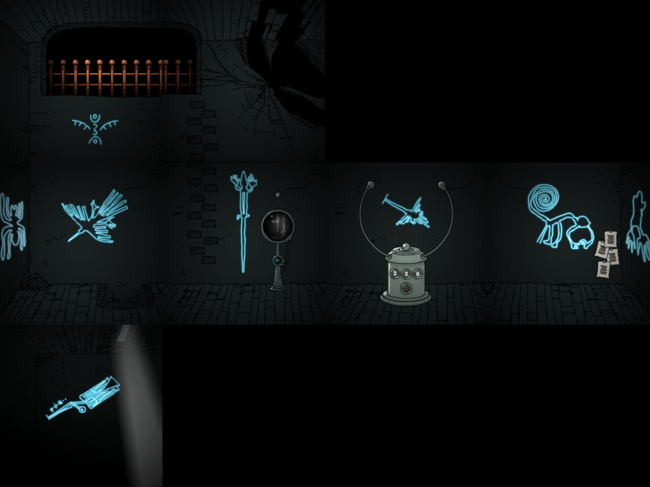