This location recently adopted its name from another location to better fit the given in-game coordinates. For the original location, see cosmic dawn room.

The observatory is a location in Submachine Universe.

The architecture of this location consists of dark blue stone bricks in the walls and blue bricks in the floors and ceiling as well. The rooms are supported by thin teal archways and lit by brass gas lamps with open green flames. The entire layout of the location is vertically symmetrical, with each far end containing a karma portal in a brass karma portal stand leading to the pump room on the left and the quiet rooms on the right. The karma portal leading to the quiet rooms contains chunks of chimney floating around it on both sides, showing how pieces of the material were also transported through the portal to both sides. Both of the karma portals are accessed via the central chamber with retractable brass ladders on chains that are controlled by brass levers. In the middle of a room is a relief that can hold four red tiles.

The location exists in an alternate layer that is accessed when all four tiles are placed in the relief. The alternate layer looks almost exactly the same as the original - even the karma portals are still accessible - except for the relief being replaced by another brass ladder that leads up an exposed stone vertical tunnel. The tunnel houses a giant copper tube with a ladder on the inside. The other side of the tube opens up into a spherical observatory that has curved brown panels and white lights situated near the ground. A chair, wiring, and a few speakers can be seen here. A control panel allows a karma portal stand to descend from the ceiling, containing a green karma portal that leads to the desert.

A photo of a domed building of the Czech Hydrometeorological Institute, used as inspiration for the location design. 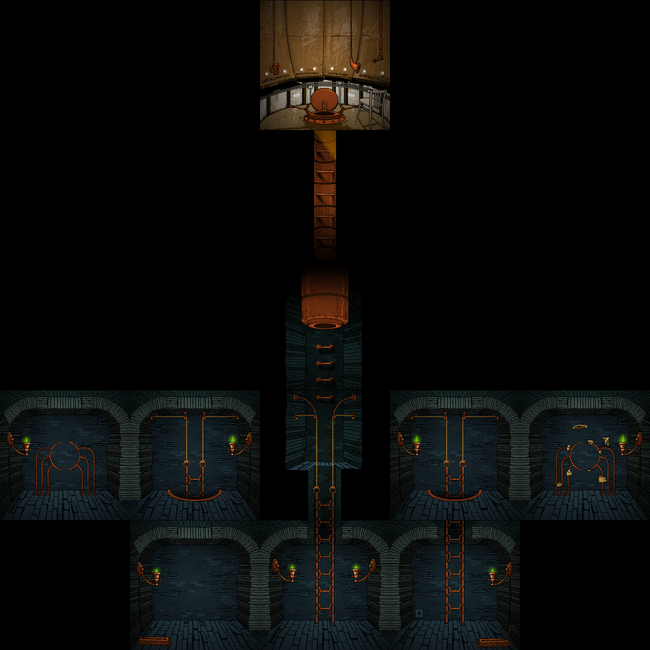