One of this location's most distinctive features is the curved metal wall that overlooks the void. The overall look here is quite similar to the Edge's; gray metal wall panels with vertical seamed riveting on them, familiar round monitors with their green-lined vector graphics displayed on them, and the telescope is exactly the same as in the Edge's Turret chain area. Everything in this room seems to be round; the monitors, the circle graph seen on the left monitor, and the statue with two rings seen through the telescope. This entire location is also round if viewed from above, however this round design significantly distinguishes it from any known area in the Edge.

There are three areas in the Pi room. The left area has a monitor that displays a diagram in Chinese about the geometry of a sphere. The diagram contains the Chinese words for center, radius, diameter, and circumference. The central area has the portal and telescope. Through the telescope, a statue of a god is seen, presumed to be made of gold. The statue seen here is different from the golden statue seen in Sub4, which has no rings, instead holding two sceptres. Based on the distinctive masonry design, the wall that the statue rests on is likely part of the lighthouse digouts. In the right hand room, there is a monitor display showing the first 12151 digits of the mathematical constant Pi. It takes more than ten seconds to scroll to the end of the text which is reached at the 12150th position after the decimal point. 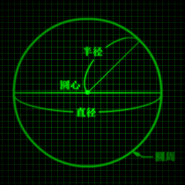 The graph explaining the proportions of a circle in Chinese. 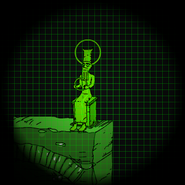 The statue of the unidentified god. Notice that it holds a circle, a shape prevalent in this location.