Portals are devices that move the player from location to location and serve as the primary method of transportation within the Subnet. They appear in Submachine 4: The Lab, Submachine 5: The Root, Submachine 6: The Edge Submachine 10: The Exit, and Submachine Universe. Mateusz Skutnik stated that early prototypes of portals were created for use by sub-bots, but were later reverse-engineered for use by humans.

This type of portal seems to be the most common. Its transportation system is based on a series of three numbers, and each location has its own distinct number. The numbers are sometimes marked with X, Y, and Z when written out. X is the number to the left, and Z is the number to the right, leaving Y in the middle. To use this type of portal, one simply enters a valid three number code and presses the button below the numbers.

The lab portal is given its defining shape from the two metal arcs that branch off and over a large metal canister that serves as the body for the device. Two metal orbs and one on top of the canister activate an energy field to transport the player after the coordinates are submitted. The portals need all three "orbs" to work. Removing only one would cause the portal to become inoperative.

Only 2 cipher plates have been shown in Submachine games, so the player is able to visit 7 different locations inside the Root. However, in one of the secret screens from Submachine 5, it is hinted that four other cipher plates could exist in the immediate area[4], implying a total of 43 possible locations.

Some people doubt other ciphers could exist, and those empty lockers in the root base could have just contained some duplicates of the already shown ciphers. The main proof behind this theory is that only 6 wires come out from the first Transporter, that leads to the 6 root locations we already know. However, some of those wires could split up in any blind spot inside the Root.

It should also be noted that each cipher plate storage box can only hold TWO each, instead of there being one big box of cipher plates (the cipher lockers seem similar to other kinds of lockers, seeing as they need keys to open).

Transporters are also seen in some Submachine Universe locations, but none of them work.

The transporters are a native structure of the Root and so they weren't built from Murtaugh's team. As a proof of this, they look even rustier than most of the Root's devices. They can't even be properly called portals since portals are able to make a person travel between different areas of the Subnet, while the root system seems to stay inside the bounds of the Root itself.[5]

These portals provided the base for the reverse-engineering done by lab scientists to develop lab portals. There are at least 32 of these portals confirmed in the subnet.

Instead of a number plate, these portals operate by inserting a connection pod into a front-facing terminal. The portal carries only one arm arc, with one orb at the end. Four other orbs encircle the top of the canister.

Two of these portals have been seen at the Edge. Portal prototype 2/32, the first portal of this type the player encounters, is old and rusty. When accessed, it tells the player that it is inoperative and requires assistance. Furthermore, it explains the history behind the portal: it was designed for use by maintenance units, only to be reverse engineered by humans, spreading the infection. It was thus considered a failure.

The second portal looks new and is operational. The player encounters it at the end of Sub6 game and, as indicated in Submachine 7, it leads to the sanctuary. Another portal of this type is at the sanctuary, preventing the player from going back because he/she left behind the connection pod. (However, the portal is used in the same spot in Submachine Universe, before and after Murtaugh's attack.)

Binary portals, found in Submachine 10, can best be compared to lab portals. They have three coordinate buttons and an activation button, and their orbs are in the same relative setup. Instead of selecting a coordinate from 0 to 9, each button has two coordinates attained by simply having the button pressed (on) or depressed (off).

To prevent confusion between these portals' coordinates and those of the Lab portals, the letter "I" is used to signify a coordinate in the "on" position; the letter "O" is used to signify a coordinate in the "off" position, rather than using 1s and 0s. With three buttons and two choices of coordinates for each, 8 different locations can be spelled out: OOO, IOO, OIO, OOI, IIO, OII, IOI, and III. This ordering coincides with the chronological order of the Submachine games, from 1 to 9, that are revisited in each location but does not correlate to the natural progression of visiting layers 1 through 8 in any particular order.

These portals also require three orbs to function correctly and emit the same energy field as seen in the lab portals. However, none of the portals seen in Submachine 10 follow the same configuration with basic curved steel arms connecting the orbs to the base. Instead, Sub10's portals are more elaborate; each contains a different array of colors and each are made of different materials. However, the orb position stays the same for all. Sometimes the orbs are stuck in walls or can be seen floating and rotating in mid-air. Each binary portal reflects the architecture of the location it is in. 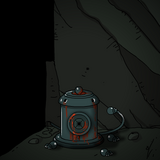 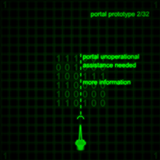 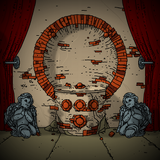 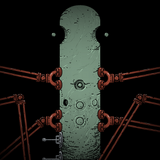 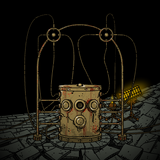 Binary portal at OIO - Resin mine. 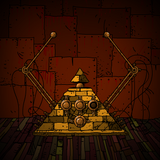 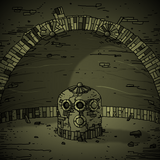 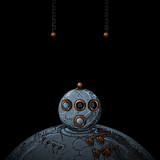 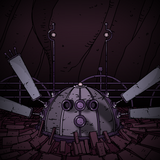 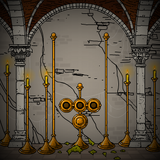