The quiet rooms are a group of sub-locations in Submachine Universe.

This location is based on four places seen in the main series games. The sub-locations can be accessed via layer doors, which are copies of the door to the second floor in Submachine 2: The Lighthouse. Three of the locations connect to the hub location, which is a defense system corridor from Submachine 6: The Edge.

Each location contains at least one security camera that has been blindfolded with a torn rag. Various scribbles of chalk adorn the walls of the locations, bearing short writings of an unidentified person.

Because each location is revisited it can be assumed that the player is visiting each location in a different time or layer than before, or perhaps both.

This part resembles the armory from Submachine 8 and is the location with the karma portal. The portal has shattered one of the brown pipes near the ceiling, and a purple liquid like that of the broken pipe in the basement seeps out. The device previously activated in layers 2, 4, and 6 in Submachine 8 has rusted, and the top part has been bent out of shape.

The left portion of the armory is not accessible, but the top right room that was previously blocked off in Submachine 8 is now open. It contains a "Big Bertha" cannon like the one in the opposite side of this area. From here the player can access a defense system corridor via a layer door.

This location bears the typical architecture of a corridor from Submachine 6. Out of a line of seven rooms, the middle three contain layer doors to the rest of the locations. Flanking these three rooms are two rooms with chalk scribbles on the wall. The rightmost room has an un-blindfolded security camera.

The leftmost room contains a karma portal stand. A karma portal was once active here; however it seems that someone or something managed to manipulate the energy and "drag" it outside the stand's boundaries. The energy was then used to "open" a corner in the room by manipulating the matter in the back wall. A room behind this one was then accessed and converted into a den of sorts, containing one of the theories and a piece of chalk, among other things. The karma portal has remained distorted and frozen in space.

Second floor of the lighthouse[]

The second floor of the lighthouse is accessed from the defense corridor via the same door as found in Submachine 2, but now the door has layer-changing properties.

The second floor is mostly unchanged from Submachine 2. One security camera is present in each wing of the location, as well as a karma antenna. A drawing by WorldisQuiet5256 can be found next to the typewriter. The knob on the radio has been removed, the lightbulb has been taken from its case, and more scribbles can be found here.

The attic section of this location is mostly the same as its Sub4 counterpart. All the Sub4 items have been removed, and the knob on the radio has been taken off. The ladder to the rooftop is missing, and a chalk scribble addresses this. The chalk scribbles show that the unnamed explorer had thoughts of "drawing" the ladder with chalk.

This can actually be done if the player first takes the piece of chalk to kim and uses the karma infusion machine there to infuse the chalk with karma. Then the chalk can be used to draw a solid ladder leading to the rooftop. The rooftop is made of green tiles and a karma portal to the observatory has destroyed the chimney. 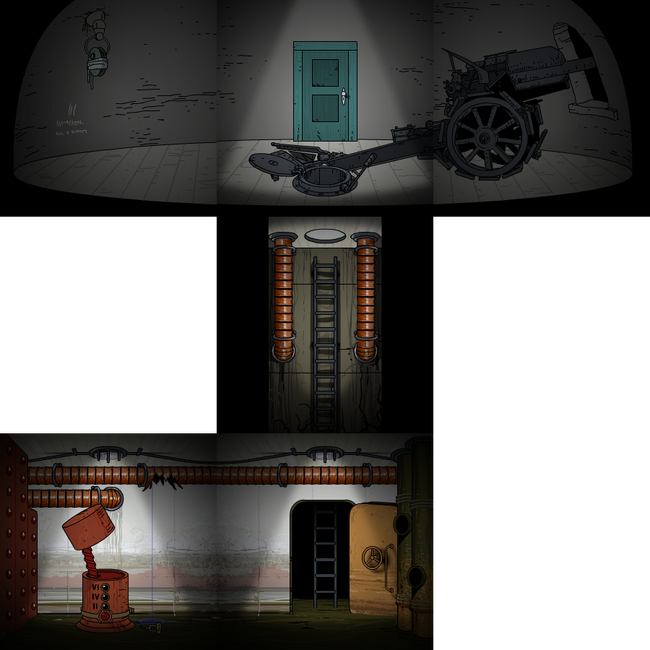 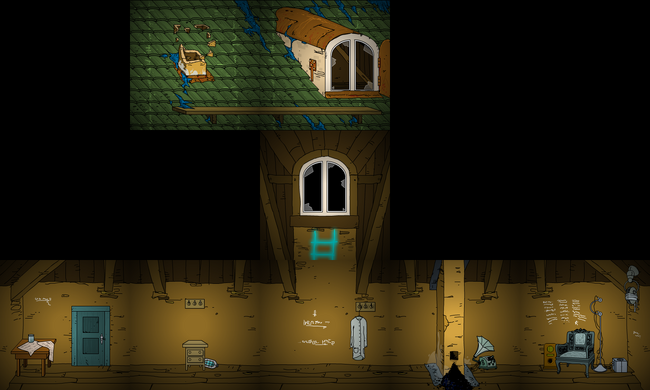