The rabbit hole is a location in Submachine Universe.

The architecture resembles that of the ancient ruins and similar locations. It is made of blue/green bricks that form loops and circles on the walls. The loops and circles bear similar patterns to those found in areas of the temple and in the altar.

Starting from the left, in the first room an old cassette player plays the ambient. Runes spell out the words "Ten thousand" on the wall. The second room contains the karma portal with a stone semi-cylinder underneath. The next room to the right contains the theory, visible from a device hanging from the ceiling. The device has three cords, three metal rods, and two red lights. The next room contains a ladder descending to another room filled with bronze pipes, one of which is leaking. These pipes also extend to all the other rooms. The ladder rungs are made of metal handles that are connected by pieces of rope.

The rightmost room contains a pyrography machine. Two wooden slabs of artwork by Ewgeny Sachinov are displayed. One depicts a lever from Submachine 3 surrounding the letter S, while the other contains the mysterious symbol found on the main menu of all the Submachine games. The room also contains two full cylinders of compressed gas and a chair resembling those found in the sanctuary. 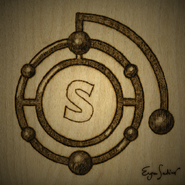 One of the two pictures found in the location. 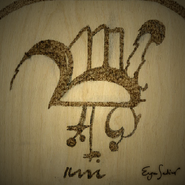 The second picture found in the location.