This location was used as a sort of base for the missions of the exploration teams when Murtaugh was initially using scientists and explorers to search the Outer Rim.

The basic architecture for this area includes a dark teal floor and white walls.

In Sub4, this location is directly accessible from the attic. The location itself is a series of abandoned rooms. Tables, chairs, and papers are scattered about the area. There is a computer station, smoking area, a bathroom, and an area for chemistry experimentation.

On the left side of the Research base's upper level, there is a computer that the player uses to minimally communicate with Murtaugh. The shattered keyboard is seen on the floor snapped in two, with dislodged alphanumeric keys strewn about. On the right side of the same level is a smoking area with a chair and ashtray, next to the window. The area directly to the left of this has a huge, mysterious device that resembles an antique, large-reservoir coffee table lighter, which becomes significant later in the game.

The lower level features a bathroom with high-tank toilet and inoperable sink. Numerous pipes come and go in all directions from the walls and ceiling, and a noticable floor drain is located in front of the sink.

In the main hallway area to the right of the stairwell, a ladder leads up to an experimentation area with a table, a gas-fed Bunsen burner and a tray of chemical vials.

On the right end of the lower level, a secured door can be unlocked to reveal a bell cube and wall mounted keypad. To the right of these is a steel security grating that must be bypassed in order to reach a portal. The portal allows the player to navigate ro various locations such as the ancient section and the ship. On the floor next to this portal is the first in the series of notes left by other explorers that the player will begin collecting during their journey.

In Submachine 10, rather than entering the lab from the attic, an architecturally similar, yet completely different section is accessed after passing through the metal window covering on the rooftop. A sub-bot capsule and a dead sub-bot are found here, as well as a couple of chairs, ashtray, and a karma stabiliser charging station. It is protected by a full-body scanning security system that requires a special type of chip to allow access.

In Submachine Universe, the stairway from the attic has been bricked up completely with mortar. The area leading to the bathroom is completely blocked off with dirt piled to the ceiling. Next to this, a table has been pushed up against the wall and dirt, knocking over and pinning two chairs. An energy receiver with wall mounted digital display clues the player to the Left chasm with the use of a wisdom gem.

The upper level experimentation area is still accessible in the SubVerse, although the lower half of the ladder leading to it has been destroyed, requiring the player to push the nearest table under it in order to reach it. The Bunsen burner, hose and chemical vials are not present. A karma portal has torn through the wall above the empty vial tray, leading to jul. A karma antenna is on the floor in front of the table.

The steel grating to the right of the portal can also be raised in the SubVerse by means of lifting the bell cube in the area. The symbol on the bell cube can be moused-over to reveal "open". Additionally, the bell's sound and the cube's animation are different. The player can then walk down the long hallway before opening the door to a small room with a round hatch on the wall. Opening the hatch reveals a vertical tunnel, the bottom of which has a karma portal that transports the player to the snow room. 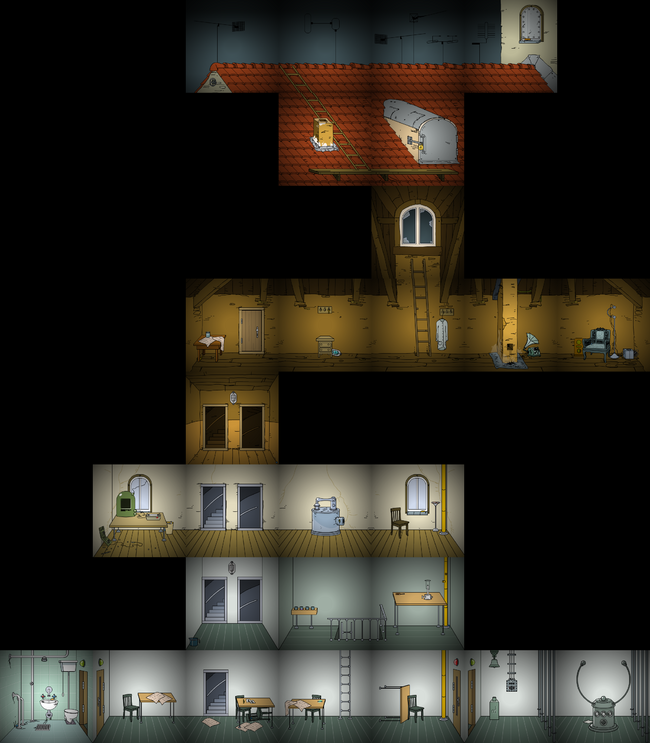 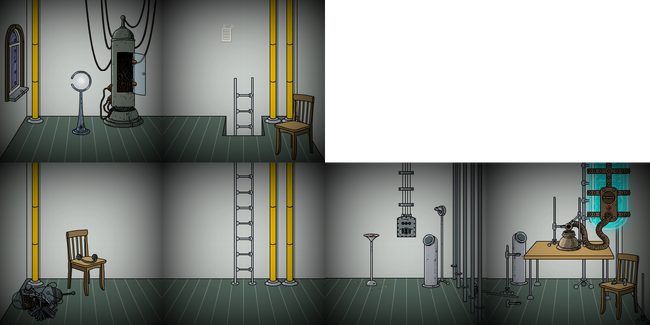