The Rooftop is the first area of the gameplay in Submachine 4: The Lab. It is where the player arrives after being teleported from the loop.

The roof is covered in red shingles and covered with black antennas, which possibly provide an internet connection to the computer in the research base. There is a window to a part of the research base, but is covered with a metal plaque held in place with screws. A ladder provides access to the lower part of the roof, where there's a platform, a chimney, and a door to the attic, sealed with a padlock (which can be broken using the hammer). The items that can be found in this area are the hammer, located on the window sill, and a valve, which can be obtained later by using the screwdriver.

In Submachine 10, the area where the valve was screwed on has been damaged along with several shingles by a Karma Portal, the ladder down to the window into the Attic is broken, and someone appeared to have set up a force field blocking off the light crown that allows the player access to the other side of the upper window.

The background surrounding the area appears to be that of a dark, cloudy sky, fitting with the ambient below. But by Submachine 10, the entire lab area now appears to have been consumed by the Void, like several other locations.

“You should arrive at the Lab”
“or somewhere nearby...”
— Submachine 4 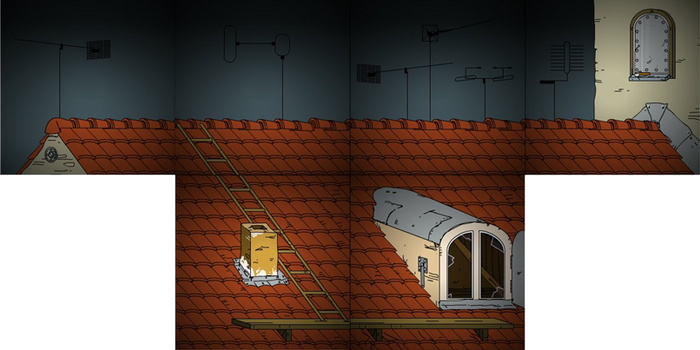