The Semotus basement is a location in Submachine Universe.

This location consists of twenty-four rooms. The architecture resembles that of the basement, with wooden wall paneling covering the floor, ceiling and lower part of the walls in each room, giving way to cream wallpaper at the top.

Part of the location is inaccessible until a bell cube is placed in the binary chambers. The section that opens up has a hole in the wall, which leads to a room with red walls bathed in red light.

Some recurring objects can be found in the rooms, including books, chairs, cameras, cabinets, which reveal themselves empty when opened, and gas canisters. There is also an intact version of the grandfather clock seen in the broken clock room. In the upper rightmost room, there is a rusty machine with a keyboard input and a screen with the word SEMOTUS written in rune language.

Placed around the location are four switches (including one in the red room), which when pulled light up an indicator in the metal panel in the room directly above the drop zone. Once all switches have been activated, the player can pick up a sigil from the metal panel.

This location also contains a karma antenna, a skull, and a barrel that can be moved to reveal a clue plate that reads "5/13". 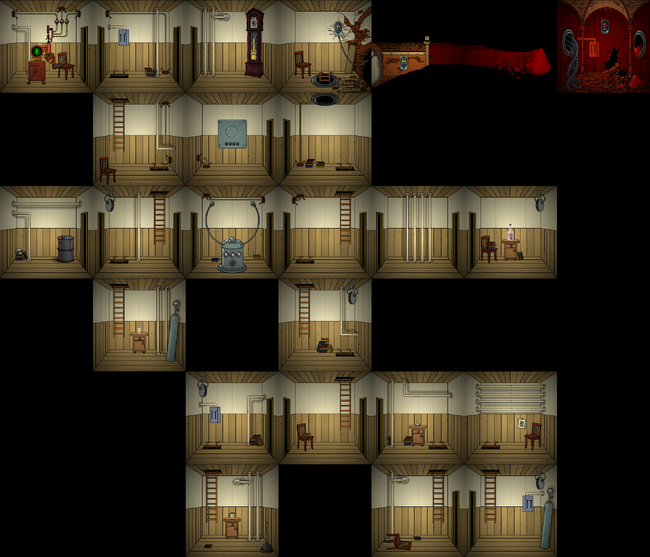 The old "Wisdom Egg room" (dubbed by the author), serving as a prototype for the Semotus basement.

"Submachine 1 invaded by Submachine 2" a fan-suggested concept serving as a prototype for the Semotus basement.

Machinery designed during a livestream and later implemented in this location.