For the similar island found in Submachine 10, see Little island .

The small island is a location in Submachine 7: The Core and Submachine Universe.

The location consists of a shattered chunk of paved topsoil in a locked suspension with a nearby monolith, located in The Core.

Floating in the Void and visible through a window in the Winter Palace's second floor, it can only be reached via a karma portal next to that window. The shattered ground is topped with some pavement material. The appearance of this location is the same in Sub 7 and SubVerse, the only difference being the placement of a stone key in Sub7 or the "Secrets Theory" by SDRanger in SubVerse.

The only structure or device in the area is the remaining base of an ornate lamp post - the top, lighted half having been snapped off. This would be the type seen erected in a series, in the lamppost section of the South Garden, providing evidence that this location is likely a shattered fragment of matter originating from the South Garden.

Fluorescent flora in the area, namely two strands of fluorescent grass and one glowing mushroom, are the only sources of light in this location. 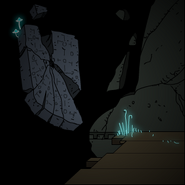 The other end of the portal in Sub7. 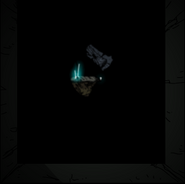 The small island, as seen from the Winter Palace.