The South Garden is a location in Submachine 7: The Core.

The South Garden was built in 1832 by the young architect Sir Henry O'Toole. It was frequently visited by Elizabeth as she took up residence in the Winter Palace.

Murtaugh also spent time in the South Garden when he lived in the Palace. He used the Palace and the Garden as testing sites for his experiments with karma. However, his experiments eventually distorted the fabric of the location so much that it was almost completely consumed by the void.

The architecture of this area is - to put it simply - fragmented. Pretty much everything inside the garden is either broken, cracked or just missing. However, not all of the garden is gone. There are still bits and pieces of the original garden lying (or hovering) around.

Most of the garden is made out of typical building materials infused with karma. This special property allowed parts of the entire structure to float in midair, lending the place the pet name of "anti-structure". Even after much of the place was destroyed, the properties of karma allowed many platforms and pieces to float in place.

The garden contains a lot of fluorescent plants which have sprouted among the floating ruins.

The walkways of the area seem to have had multiple types of paving. These include stone blocks, white and blue tiles in a chess-pattern, and dirt floors.

In one terrace-like area, which is still almost totally intact, there are thin tall columns that circle the area. The floor is checkerboard-patterned with blue and white tiles. Furthermore, a portal door works as an entrance to this area along with a karma portal that distorts the space inside the terrace. Fluorescent grass grows tall in the area.

Another area gives hints that it once was similarly intact, complete with a tiled path traversing the Garden, but now the area has been distorted to unrecognizable lengths.

A third area is a romantic walkway that is lined with exquisite old gas lanterns. The path also has a fence, which consists of poles linked by a small chain. This same type of fence is also seen in the areas with the brick floor plan.

“We the King”
“Welcome you in Our South Garden”
“Anyone who seeks peace and calmness will find it under the leaves of our blessed florae.”
— The King's description of the garden.

“They didn't have to mimic. They were already living inside the subnet.”
— Liz

“So when things started to collapse, why certain bits and pieces got left behind?”
“They just stayed in place...”
“And why those in particular?”
— Liz 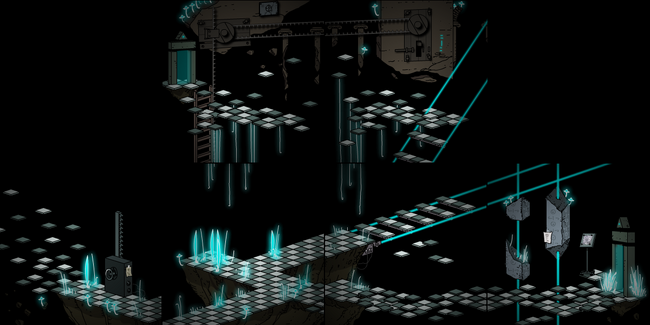