An unidentified explorer searches the ancient ruins and ends up finding a wisdom gem.

There is only one location in this game, namely: 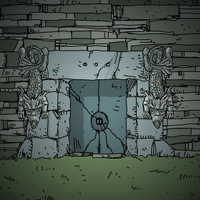 This area is based on an ancient temple made ​​of gray stone tiles. The outside of the ruins has a medieval castle style and features several statues depicting dragons with a Japanese touch not found in any other Submachine game so far. The inside of the ruins have an Egyptian and Mycenaean architectural style with statues of horses and jackals (which both reappear in Submachine 4) except that the construction material appears to be an easily broken, blue-tinted stone. Additionally, there are several golden statues of stylized winged scarabs, a common theme in Egyptian hieroglyphs. This location contains a wisdom gem.

The game was developed by Mateusz Skutnik for the Jay is Games Casual Gameplay Design Competition #1, which had been announced on the 4th of August 2006. The deadline for submitting an entry was the 25th of August.[2] Because of the limitations of the competition, the game was quite short, only 18 screens, and the game was not related to the main series,[3][4] although parts of the location (including the wisdom gem) were later adapted into Submachine 5: The Root. Importantly, the game was the first Submachine game to use a new engine Mateusz had created.

It seems that the game was finished and sent by the 19th of August, and Mateusz announced it on the Rewolucje.com forum, which was the official discussion forum hosted by him at the time.[3] The actual release of the game by JayisGames.com was on the 26th of August, along with seven other contestants.[1]