For the HD version of this game, click here.

Submachine: Future Loop Foundation (or SubFLF) is the second side game of the Submachine series.

After a short introduction (with the quote "All memories are lost in time like tears in rain") the game starts and the player (Patient 3218) finds him/herself locked into an isolation cell with padded walls. The only thing in the room is an old tape recorder.

Right outside the isolation cell, there are mysterious ruins and on a wall, one can find some runes also seen in Submachine 2: The Lighthouse. By using an old image-projector the player can teleport in-between two different locations. In the second location, the player can find a few old music cases labeled "Memories of a Fading Room" and "Future Loop Foundation Scratch & Sniff E.P." and listen to a guitar song in a pair of headphones. There are also several real-life photographs to be found. It seems as though this person has suffered severe memory loss (although it's never explained how or why), but seems to at least partly recover by the end of the game: in the end, an old film is played and the text appears: "It's all coming back now, I almost remember my name, I know where I must go now, to find the root of all this". 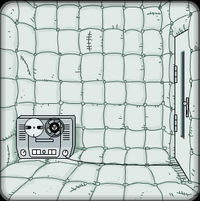 This location consists of an isolation cell as those used to lock some patients with severe mental illness. It is fully padded. On the outside, there are several abandoned-looking rooms and an area which suggests that the game is set in a part of a prison. There is a projector that can be used to arrive at the memory bank. 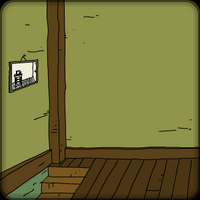 This location is where the player comes after viewing the slide projector, and is dedicated to the band Future Loop Foundation with real images of its career and records. Through the box with a picture of a projector can return to the first area of the game. Solving various puzzles, the player can finally see a movie and apparently able to recover part of his/her memory.

The online version of the game was released on June 6, 2007. It was originally made for a band's (the Future Loop Foundation's) website and leads to a secret section of their website. It was later updated in its HD version (formally known as Submachine: FLF to fit the main storyline better instead of being just a band promo.

On December 8, 2014, Mateusz Skutnik formally announced the upcoming release of Submachine FLF HD. Calling it a "redux version", he stated that the HD version would be revamped with new puzzles, music, and locations and that it would be "basically [a] new game". He also uploaded a screenshot of the HD version of the game[2].

Retrieved from "https://submachine.fandom.com/wiki/Submachine:_Future_Loop_Foundation?oldid=52995"
Community content is available under CC-BY-SA unless otherwise noted.