The game starts off with the player in a room in some construction, with nothing else to do than to try and escape. To accomplish this feat, the player has to find four tiles (Tile A, Tile B, Tile C, and Tile D) and insert them into the four sockets in the room to the left of the starting room.

There is only one area in this game, namely: 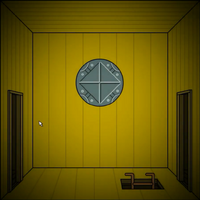 This area consists of several rooms with the floor and walls made of yellowish wood with varying color hues. The rooms are all square, and nearly every room has one or two doors with a wooden frame, and some also have ladders to go up or down. The area hosts several pipes and electric devices, along with other miscellaneous objects.

The original version features 9 rooms and has one ending, where the player escapes to some outside area. Extended version features 19 rooms and has two possible endings: the first, where the player chooses the blue door and escapes (as in the original); and the second, where the player chooses the red door and reaches a different end scene (later found to be the prototype of Sub2). However, only the version of the game specifically subtitled "Extended Version" has these two endings; both the original and the newer version currently on Mateusz Skutnik's site have only the escape ending.

The main reason for expanding the game was to add new puzzles to a successful first installment.[3]

A remake of the original, Submachine: Extended Version, was released, and on some sites, replaced the original. This version features a Reset button and a painting of the lighthouse from Submachine 2: The Lighthouse. This game features two possible endings, and in addition, it was made possible to find a wisdom gem in the game, which made it tie better with the plot line of Submachine 2: The Lighthouse and Submachine 5: The Root. At the beginning of Sub2 the player starts off with a wisdom gem in their inventory; the fact that the player can now find a wisdom gem in Sub1 explains how they had accumulated the wisdom gem in the first place. After the wisdom gem was used in Sub2, it is later recovered and reused in Sub5. On January 1st, 2008, Submachine 1: The Basement v2.0 was released, replacing both the original and the extended version; the game-play is almost identical to that of the latter except the second ending was removed, the newer version uses the latest Submachine game-play engine, and the puzzles were "made harder" by adding more rooms, making it necessary to look for the answers all over the map. On March 28th, 2014, Submachine 1: The Basement v5 was released; the only change besides updating ads was the golden coin being replaced with the ancient coin, because "the [golden] coin doesn't fit the overall lore of the game"[4].

A newer version of Sub1 was released by Mateusz, which was temporarily available for the iPhone, and iPod Touch. This version of the game contained four extra rooms housing an extra puzzle to get the valve instead of just finding it laying on the ground. The puzzle involved turning on a power switch (closely resembling a power source in Sub4's basement) that then activates a screen showing two symbols. The player then headed down to the bottom's new area to place them into that machine and receive the valve.

Gameplay was used by tapping where one would normally click. This made the game more difficult for those who hadn't played the original, because in the original the cursor would change when hovering over an item, and in this version, there is no cursor.

The real release date of Submachine