“Well what is our purpose of going to the core.”
“we follow murtaugh”
— Gemini and Mateusz Skutnik on Pastel Forum

The game starts immediately after the end of Submachine 6: The Edge, with the player having been transported to the sanctuary outside the Winter Palace. The player finds a way to access the Palace after journeying through the aftermath of Murtaugh's invasion on the Core, which took place some time beforehand. After accessing the Palace, the player finds notes from Elizabeth detailing how the palace came to be and how it was destroyed by Murtaugh's early experiments with karma, which took the form of karma portals.

The player uses some of these portals to access different parts of the palace, as well as karma "doors" to explore the South Garden. The player collects objects and signs to power up a large capsule that serves as an entry point to Elizabeth's ship. The player finds more notes by Liz, including one expressing her sorrow at deserting anyone counting on her, as she felt forced to leave due to Murtaugh's invasive forces, the evidence of which can be seen in the ship as well. The player exits the ship and ends the game by entering a large green karma portal that transports them away from the ship.

“OO What does it emiss?”
“deathrays? beats me.”
— Kian Mayne and Mateusz Skutnik, on Facebook

The following are screenshots of Submachine 7 machinery. The author stated he greyed out the background because it would have been too "revealing". He also said that the surroundings wouldn't be like the Submachine 6 rooms.

They were posted in Mateusz Skutnik's Facebook account on the third and fourth of November 2010. Mateusz stated that the machinery of the first picture "shines left" and that the switches are "not relevant".

The third picture was added on November 27th. Mateusz did not give any hints to what it may be other than saying he had drawn it that same day and decided to share it with everyone. In Pastel Forum the picture was thought to be poorly shaded, and many saw something in the black background.

The fourth picture was added on December 4th. Mateusz said it might have been an emission type machine of some sort via his Facebook. No other hints were given. In Pastel Forum the piece of machinery was quickly joked to be a cooking device for the Subnet, in fact, Mateusz himself joked it to contain popcorn. Also, he stated that he would not release any more pictures due to the cooking device joke. However, this was only kept for 7 days.

The fifth picture was added on December 11th. It was the first full-length screenshot of Submachine 7. Around this time Mateusz stated on Facebook that "the time is nearing" which could have meant that the release of Submachine 7 was very close.

The sixth picture was added on December 14th. It was the second full-length screenshot of Submachine 7. Again Mateusz Skutnik stated that release was near with "the best is approaching".

The seventh picture was added December 15th. The caption written by Mateusz had been assumed to mean that the release was December 16th. The image is from the title screen of Submachine 7. It was thought to be an item or object we use throughout the game (this was later confirmed to be the device in the "Calling the Capsule" Puzzle).

On the first of December 2010, Mateusz Skutnik announced that a mere fifty rooms would not be enough for this game, as he had promised himself and the fan base on earlier occasions.

When questioned he stated that he hadn't changed the old room limit, but the story just grew bigger than that. He had also stated that all of his plot ideas for the game couldn't possibly fit in and hinted that some of them will end up in Submachine 8 and Submachine Universe. 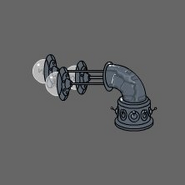 The first picture of Submachine 7, posted on 3rd of November (now known to be machinery in the Sanctuary). 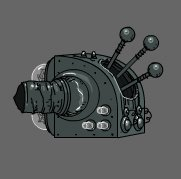 The second picture of Submachine 7, posted on 4th of November (now known to be machinery in the Sanctuary).

The third picture of Submachine 7, posted on 27th of November (now known to be the control of the portal door). 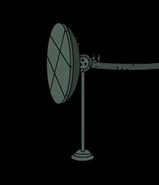 The fourth picture of Submachine 7, posted on 4th of December. 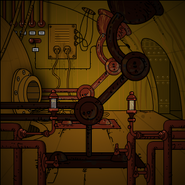 The fifth picture of Submachine 7, posted on 11th of December (now known to be part of Liz's ship). 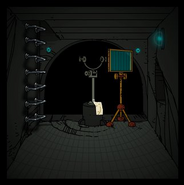 The sixth picture of Submachine 7, posted on 14th of December (now known to be part of the Winter Palace). 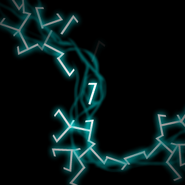 A screenshot from the intro of Submachine 7. 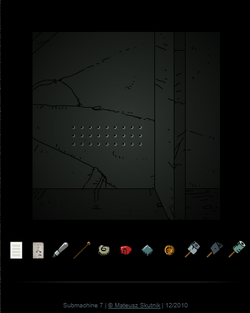