“Liz: You can create dimensional portals while being inside of such portal?”
“Murtaugh: Yes, I can.”
“Liz: And when you do, what happens then?”
“Murtaugh: ...you change direction.”
“Liz: Direction of what?”
“Murtaugh: Of everything”
— Transcript 17/38

The game starts out with stating, through a conversation with Murtaugh and Elizabeth, that the player had not ended up in the fifth layer of an unknown target destination as intended at the end of Submachine 7, but instead ended up inside layer 1 in Sector 9, which was a sidetrack.

Most of the game involves the player experiencing switching between different layers and getting a general sense of the Plan. The player uses a device called a navigator to "unlock" access to the same location in seven different layers. The player learns more about how Murtaugh was viewed by those around him, and how the concept of multiple realities in the subnet made the Collapse much more important and complex than ever thought before.

The game ends with the player escaping Sector 9 and heading towards the knot by exiting the water pantheon in layer 5, as planned before.

The author stated that all of his ideas for Submachine 7 didn't make it to the game and that some might end up in Submachine 8. Fully exploring the layer concept might have been one of those ideas.

On 21st of December, 2010, Mateusz Skutnik stated that he already had a rough idea of Submachine 8 and its contents, even its storyline, and puzzles.

He declared that he did not wish to receive questions like; "When is Sub8 coming up?!" in the near future. Every time someone asked, the release would be pushed forward by a week. Also, as he said jokingly, a bunny would die. On Facebook, he stated that it would be allowed after 3/4 of the wait.

Originally - on August 8th - the author stated that Submachine 8 would be released during 2011, after measuring his time frame. However, he was later forced to reconsider this evaluation but still worked to fulfill that goal. He mentioned that it was possible that the game might be released in early 2012 in January or early February.[2]

Finally, on December 3rd, the author stated that Submachine 8 would be released in either January or February 2012.[3] However, the game had been delayed and the release date became unknown. Soon after, the author said that he wanted to release it before June 2012. [4]

On February 14th, the author received music from Thumpmonks. He also said that he really liked it.[5]

One April 24th Mateusz Skutnik released a webpage on Facebook that showed the current development progress of Submachine 8. By September 26th, 2012 completion was at 99%. Accompanied with the link was a comment section for those wishing to post their thoughts on Facebook and a Submachine 8 ambient playing in the background. Dev page

In August 2012, a teaser screenshot was released that provided a clue to the surroundings to expect in the eighth installment. It was also interactive, allowing you to press a button and press a lever with a lock on it. The text under the image read "coming up in September" thus confirming the game would be released sometime in September 2012. Interactive teaser image

Additionally, the main Pastel Stories website was updated to reveal updated menus for content. Among them was the Games slide that showed a motion image of what appeared to be an escape pod at a dock with blue lines in the background.

Mateusz Skutnik then posted on Facebook that the game would be released on Friday the 28th, around 1 PM UCT.

"Ok, so here's the deal.
The game is ready. Please give me one day for final preparations (website, blog entry etc), and the game will be released on Friday, 28th, around 8 AM ET (that's 2 PM CET).
We cool?" 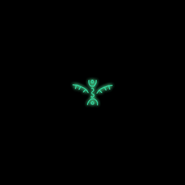 Placeholder image found in Submachine 8's page on pastel stories[6] (Doesn't appear in Sub8, but appears in the Nazca room of the Submachine Universe) 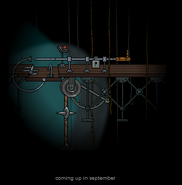 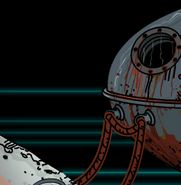 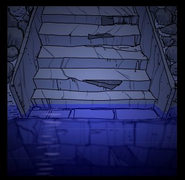 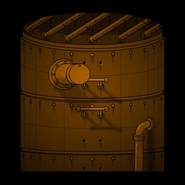 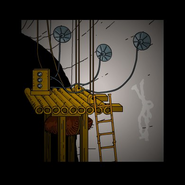 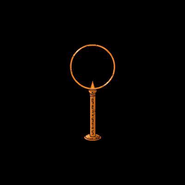 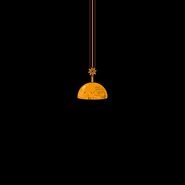 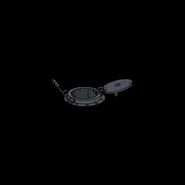