The Root is the first area in the subnet ever built. It is the focus of Submachine 5: The Root.[1]

The Root is the first man-made submachine, built between 1900 and 1906. It was an engineering miracle at the time. However, the Root is much smaller than modern submachines, a mere experiment in comparison. Its capabilities are similar to the basement from Submachine 1[1]. The Root was mostly the work of a creative genius, who received directives to create the machine. He named his invention "Submachine" due to the belief that it was situated underground.[2][3]

Not much is known about the operations of the Root. The builders invented a transportation system to travel within the massive underground structure. These devices were named transporters.

In Submachine 5: The Root, seven different areas are accessible by the Player. However in the lucky room the player discovers that there were originally 6 plates and therefore 43 areas in the Root, because;

However, in Submachine Universe it was revealed that there are twelve more cipher plates. It is possible that this is just a cipher plate storage for replicas of the original 6 plates or cipher plates for another transporter-network entirely, but this raises the amount of possible location inside the Root to 157;

If this storage is extension to the existing storage for cipher plates, there is a total amount of 343 locations inside the Root transporter network; 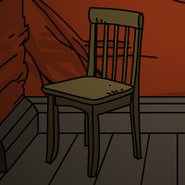 These chairs appear to be part of the standard Root furniture.

This is the standard lamp of the Root. It's similar to the lighthouse's lamp. 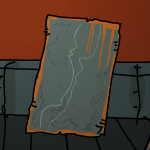 These metal plates lie all over the place. 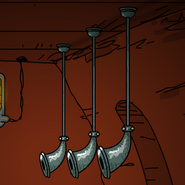 These pipes might have been used for communication within the Root. 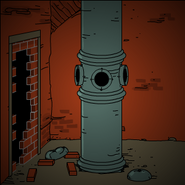 This is the back side of the brick door once it is broken.