The watchtower is a location in Submachine Universe.

The location is divided into two areas connected by a tunnel: an outdoor landing area where visitors arrive via karma portal, and the interior of a tower.

Most of the ground is covered in a solid blue resin-like substance with the void in the background. The karma portal is held in place by a stand adorned with twelve glowing blue bulbs. A series of wires connects the bulbs to a powered hub, where a glowing blue "R" is seen. A thick brown cable travels from this device and snakes up a wall to the far right. This wall is the same type of toothed wall found in the spike room, except it is tinted blue. A suspended pillar, also like the one in the spike room, can be seen behind the wall.

To the left of the portal is a brown rock wall, where a passage has been dug. The remains of an excavation show blue-light flood-lamps that can pick up the rocks from the wall.

The player can navigate through the rock passageway to an indoor area with wooden paneling. This area is a four-story-high tower, with one room on each floor. A series of yellow rungs runs along the rear wall, allowing for movement between the floors. Each room is lit by an orange lamp. The first floor contains spillage from the blue resin and a table with papers, as well as layer screens and a telescope (like the ones seen in Submachine 7: The Core). The second floor is a library, with shelves lined with books. Additional books are found on a chair, as well as two of RuloCore's theories. The third floor shows seven of RuloCore's sketches, either tacked up on a wall or suspended from metal posts. The fourth floor shows the top of the tower, a chair, scattered papers, and two listening devices.

This location's ambient was chosen by Mateusz Skutnik among several pieces composed by RuloCore, author of the theories and sketches. 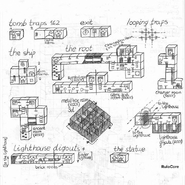 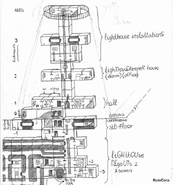 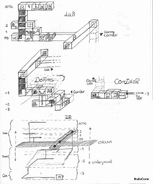 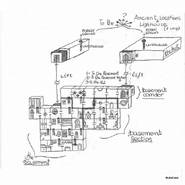 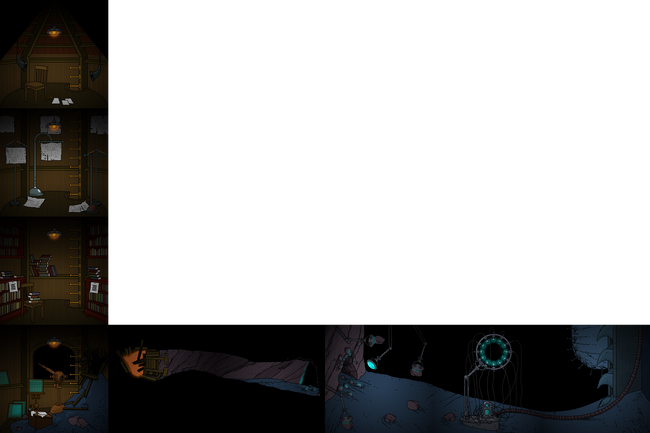