A wisdom gem (also known as ancient crystal of wisdom and energy gem[1]) is a mysterious crystal that appears in various Submachine games.

While there are many theories about the wisdom gems, those that seem valid suggest that they are an energy source of some sort. That theory is confirmed by Murtaugh himself in one of his notes, where he also defines them as "artifacts engineered in the first sub-era by unknown manufacture".[2]

Wisdom gems look like stretched-out octahedrons, some blue, others colorless. Their shape is reminiscent of the logo from "The Sims" series of games. They do not react with citric acid, as shown in Submachine 5 where one is submerged in the acid without suffering any effects.

Four individual gems are seen throughout the main series, two of which appear in more than one game. Nine different gems can be obtained in Submachine Universe.

Wisdom gems are found in the following games:

The Wisdom Gem makes its first appearance in the side game Sub0; the game's only goal is to collect the "ancient crystal of wisdom" (how it was referred to in the game), hidden inside the ancient ruins under an Anubis statue. It glows green after the Player enters the room where it is hidden.

The wisdom gem appears in Sub1. It is located in a hidden room inside the basement and is not needed to finish the game.

In Submachine 2, the player starts out with the gem kept from Submachine 1. It is used to power some sort of device used to drop a ladder in the dungeon beneath the lighthouse's foundation. Since it is originally located into the basement it is possible that this is the same wisdom gem Murtaugh used to teleport himself from the lighthouse to the basement.[3]

There are three wisdom gems in Sub5. They are used to power a mover. One gem is hidden inside a metal box in the (1,2) area of the Root base. The metal box is then dissolved in the acid bathtub in the (1,0) area, exposing the gem.

Another gem is collected in a room similar to the one containing the gem in Submachine 0, accessed from the (2,1) area of the Root base. This time, however, instead of floating in the middle of the room and glowing green, it seems to have exhausted the power to make it glow, and is laying flat in the bottom right rear corner of the room. It is unknown why the gem is still in the same place, as it was supposedly taken away after its discovery in Submachine 0. One theory suggests that Mur possibly placed it there and later in life found other wisdom gems.

The third gem is collected by accessing the digouts location from the pipe room.

In Submachine 7 the wisdom gem is known as an "energy gem". It is found inside a box in the Sanctuary, which allows the player to activate a portal door.

In Submachine 9 the player revisits the Mover from Sub5 by way of karma portal and takes the three gems out of their holders. The three gems are then used to open a container which conceals the eighth button for the navigator.

There are currently 9 wisdom gems in Submachine Universe, all obtainable. When in inventory, they glow a shade of blue. Locations containing gems often have the hum of energy or machinery as part of the ambient music, suggesting that the gems are making these sounds, but removing the gems does not change the ambient noise.

Three are in 010, the tri-gem room, placed in a receiver looking similar to the one in the mover, powering something above the location. These gems glow white in a pulsating form, corresponding with the 3 energy surges created towards the ceiling.

Two are in 185, the paired gem room, placed in a strange looking receiver. They seem to react to each other, which illustrates the "Paired Gem Theory" by DiscoMcDisco available in the location. The receiver is attached to two gauges, apparently showing the energy level. Both gems glow blue.

Two are in 241, the searchlight room, placed in receivers undoubtedly made to be used with a coil, powering the searchlights. The receivers power the portal as well; both must contain a gem or it will not function. These gems glow blue.

One is in 917, the looping sphere, placed in a receiver that is powering the portal. If removed, the portal becomes inoperable.

One is in 947, the gem harvester, placed in a harvester which is transferring it's power through the pipes. Due to a broken pipe, it suffers a 20% energy loss. A sub-bot was sent to deal with the problem. If the gem is taken, the power pipe stops arcing. It is unknown where the dripping liquid in the same room is coming from, perhaps some kind of fuel or coolant.

Apart from the above places, there are 2 more locations where a gem can be placed. Since they don't have a gem of their own, one must be taken from one of the above locations.

The first place is in 001, the research base, behind the locked door (the key can be found in 277). It is made to be used with a coil, but a gem is an acceptable energy source, also shown by the searchlights in 241. When a gem is placed there, the display showing the clue to 613, the void, is powered.

The second place is in 917, the looping sphere. The receiver looks the same as the second receiver in this location, and when a gem is placed it powers up a display showing the "Portal workings theory", which clues to 011, Clockwork corridor.

Additionally, there is a non-functional receiver in 859, the collector's room. Trying to place a wisdom gem there will have no effect. 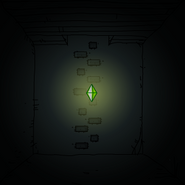 The Sub0 wisdom gem in its room.

The wisdom gem in the SD version of Submachine 1.

The animation of the wisdom gem in the SD version of Submachine 1. 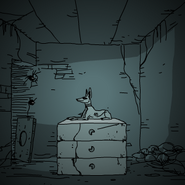 The Anubis statue that is right over the room that originally contained the wisdom gem 3.